Like a gruesome clip of a horror movie, the video and audio play over, and over, in my head. 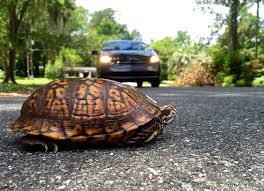 Most people, I guess, can drive past a turtle and never even see it. Now, with the added distraction for drivers of cell phones, Turtles in “High Kill Zones” don’t stand a chance, and this particular day, the sun was shinning, casting long complicated shadows through the trees that were left along the side of the road where the new golf course was built.

Early September, still warm, and an early morning rain had left the road wet and scattered with leaves and pine-cones, anything could be a turtle. It takes attentive eyes, as all driving should, to spot things in the road that should not be run over.

He was in the other lane, heading my way. I saw him as I passed and I was able to stop perhaps 25 yards beyond him. I also noticed the red mustang coming his way, in his lane. I had little time.

Window open, I am half way out, waving frantically. I do believe the driver was looking at his phone, he did not hit  his brakes until he was past me and on top of the turtle. I heard the crunch. I saw the splat.  It was a direct hit.

“Why?! Why did you run over that turtle!?” I screamed ! holding back the tears I knew would shortly follow.

“What?” I didn’t run over any turtle” He replied..

“You Idiot! I just saw you do it!.” was my only retort, as another vehicle approached behind me, I knew there was nothing left here for me. Fortunately, I was close to home, and able to drive through the sobs..

I know that my work here is difficult.

Aren’t we are all fighting battles of our own? 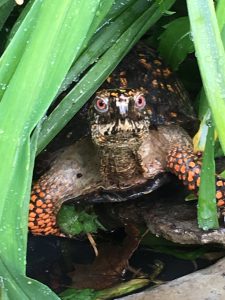 I often wonder  why is it that I am the one that has to bear witness to this sadness.  How can this one turtle turn me into such a pathetic  mess.? Is it to remind me how necessary it is to provide sanctuary for our defenseless shelled residents? To keep me on task when there is so much suffering all around the world?

I try to consul myself with reassuring thoughts that at least he was mourned, unlike so many that are hit and forgotten. Do  people that hit them by accident feel bad? do they even know?

And I think about his habitat. He came from the golf-course, the fertilized, groomed golf-course, which used to be woods with native blueberries, creeks, rotten trees, bugs, birds and wildlife that thrived along the river, and he was heading across the road to the new housing development.

This is no interstate, not a high speed road, but a quiet rural road that is slowly destroying wildlife habitat with human encroachment. 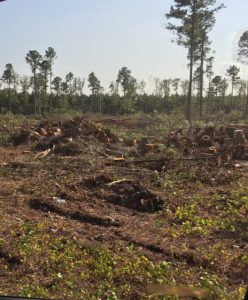 We call it  the Kill Zone

I am surrounded by it.

Turtle road rescues in my rural neighborhood are on the down slide. Not because these roads are getting safer for turtles, no, it is because the increase in vehicular traffic, which comes with the building of suburbia,  has already killed many of the turtles that cross these roads.

I become a little “gun-shy” after an experience like that, and quite honestly, the last thing that I want to see is a turtle in the road. I have had my fair share of injured turtles brought to me this summer. Even with the amazing healing powers that turtles possess, a little experience has taught me when they should go the the Virginia Wildlife Center for repair, to a wildlife rehabber for some TLC, or if the injuries are terminal. Its been a rough summer.

Two days after the smashing, I am again driving home, my Husband is in the passenger seat.  Traversing a road with more traffic, higher speed, very few areas with habitat.

“Please don’t let that be a turtle” I say as I approach,  hitting my breaks as I straddle him and come to a stop. My heart sinks. I can’t breath. I cannot move. My Husband, bless his heart, says “I’ll go check”.

I wait, Praying that he is alive and uninjured. My husband returns with the turtle. He is closed up tight, but undamaged and alive.  I make a quick note as to where exactly he was found, and where he was headed, and I take him home.

Turtles need to stay in the wild.

Box turtles have roamed this land for more than 200 million years. Fossils have shown us that they actually moved with the tectonic plates that make up our land masses, and are found on all continents except  Antarctica.

Turtles all over the world are struggling for survival as humans destroy habitat.  There are a handful of very active turtle rescue groups that are helping restore native populations of turtles from parts of the world that I will never visit. Ocean going Sea Turtles also have a large following and these amazing beauties are monitored as well as they can be. So it amazes me that our little native turtles The Eastern Box Turtle, one of the most beautiful turtles in the world,  are all but forgotten. 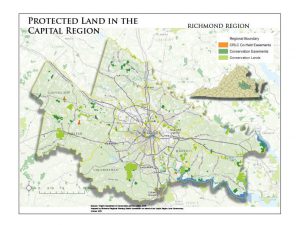 Statewide, Central Virginia has the second smallest percentage of preserved land at just 11.7 percent and we loose about 0.5 percent annually.  As you can see on the map there is very little protected land in Central Virginia where suitable habitat can be found.

Virginia, as a commonwealth is negligent in preserving and protecting wild spaces for non game species, and a noticeable void of “green spaces” can be observed on the Virginia State and Federal land map. There are virtually no parks or green spaces in all of Central Virginia along the 95 corridor, from the James River in Richmond, north, parks and wildlife areas are only found along the Bay  and in the mountains of Virginia. Here in the center of our state, the Piedmont Area, which consist of the Fall line is full of amazing rivers that  are enjoyed by many. The white waters that are created at this fall line bring, outdoor revelers and wildlife alike, but there are no parks to visit and no wildlife areas.

The Wild is disappearing quickly. 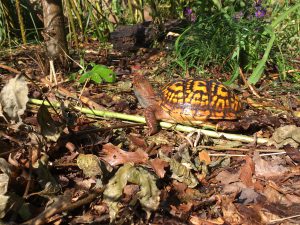 I have a neighbor who owns the 80 acre parcel behind me.(That is a whole separate story) His property is bordered by a good size creek that flows into the South Anna River. This neighbor does watch out for turtles as he traverses the area, stopping for them when they are in the road. Unfortunately, despite my efforts to educate him on leaving the turtles in their native home (Box turtles generally stay in a territory all their lives and learn where the best food, water and shelter are), He brings them to his 80 acre property  behind me and deposits them along the creek.  So, I know that there are wanderers  out there.

My neighbor and I seldom visit, and I have no idea where he finds these turtles, or what their habitat is like. I do know that each time I find a turtle in a questionable location, a location where there is no suitable habitat, like in the middle of a heavily traveled intersection or crossing Interstate 95 (yes, those have both happened), I have to do a lot of exploring around the area for a logical reason, I do a lot of soul searching and then I have a bout of guilt. Not because I am about to take that turtle home, but because of what we have done to the earth that was put in our care.

It is unfortunate that there is no easy answer to “what to do with a turtle that is in the road and has no habitat  or no longer has any “wild” to be moved into?”

In a perfect world we can move the turtles “in the direction that they are going” . When this ends up being a parking lot, a shopping center, or a newly created suburbia, hesitation  should ensue, and some common sense should prevail. This is my world, and it is complicated.

My Habitat assessment that I took the day following the road rescue was disappointing to say the least. The small patch of trees that I assumed he exited from was shallow and backed by a large soy bean field, still waiting for harvest. The area directly  across the road, “the direction he was going”, had recently been bulldozed and cleared for a high end development, and heavy equipment was still pushing around earth.

It is quite possible my little road turtle was a “wanderer”, and was not moving about his home territory to the best hibernation place, but was actually on a journey, navigating by the sun, trying to return to his home. Judging by the amount of protein this little guy has eaten, I would presume that he has had  difficulty obtaining food on his own. If this area was his home base, and he had somehow managed to cross this busy road previously, the habitat that he had once memorized was no longer in existence, and leaving him there is no different then leaving him in a strange place. Survival would be difficult and unlikely. 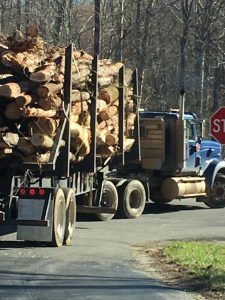 So what do we do with all these Box Turtles that once called our lovely countryside home?  If we don’t start preserving land, and I mean land where we do not log, farm, or develop, and if we don’t start soon, I am afraid that our little box turtle will slowly fade away into extinction in Central Virginia, and the day will come when our grandchildren find a turtle shell, and we will have to tell them about the amazing and personable creature that used to live in it and how  we destroyed its habitat and why they no longer exist.

What Can You Do?

Stop for turtles in the road and help them remain in the wild when ever you can, and if you find one that has no wild to be moved into … do the right thing.. find a rehabber, or wildlife rescuer, someone who cares about our wildlife. Reach out !  Be heard and never give up!

We Are the Only Advocates that our native box turtles have!  We may not make a difference for all the turtles, but for each one that we help, it is a matter of life or death.

Please support land preservation organizations and educate others on the plight of the Eastern Box Turtle.

We Are Their Only Hope. 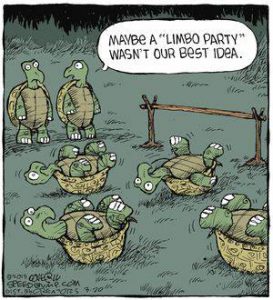 Have a question? concern? or just want to talk turtle? I would love to hear it..! Leave a comment!