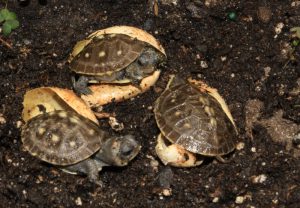 Finding such a small creature is indeed a stroke of chance and luck, but is it right to think that it needs help and that you should take it home?

Before you decide that this little dinosaur will be better off with you lets consider some facts and the circumstances.

EVERYTHING and I mean everything a turtle does is due to its connection with the earth and the weather in its habitat. Turtles have been surviving this way for more than 200 million years, yes, since the days of dinosaurs, and have evolved to have some amazing “super powers” to get them through the tough times. All turtles come from eggs, and like the Dinosaurs before them, incubation lasts for at least 60 days. In climates where turtles Brumate(Hibernate), it is not uncommon for hatchlings to stay in their underground nest for their first winter and wait for spring rains to awaken them for their first venture to the surface 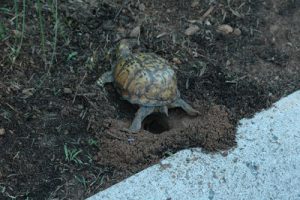 All mother turtles will  prepare a nest by digging a hole with her back legs as deep as she can. Depending on the weather and food supply, some turtles will lay a clutch of eggs two or even three times a summer, and
although mother turtles abandon their nest after it is completed, each type of turtle will carefully find the best location to dig their nest and, to give their hatchlings the best chance of survival.  Most turtles, including water turtles will seek out land that is above flood level to place their nest, allowing temperatures in the nest to stay stable.

Why did you find a Baby Turtle? 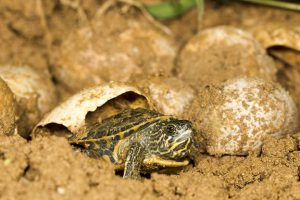 Fluctuating temperatures are the most common reason that one finds baby turtles during times of the year when you would not expect to find them. Late warm rains in October, or early warm rains in March sometimes trigger the “its spring” response in nestlings causing them to dig to the surface, only to find an inhospitable climate.

Baby Turtles are also often disturbed with construction. Finding baby turtles in newly dug piles of dirt from previously undisturbed wooded areas is becoming more and more common as we push the limits of preserved land, and encroach upon native habitat.

What Kind of Turtle Did You Find?

To the common eye, baby turtles all look alike, but can be easily differentiated by carefully looking at their feet.

Box turtles are land turtles and have small dinosaur like feet. It is very important to note that Box Turtles are NOT water turtles, and although they can swim, they will also drown if unable to get themselves out of the water.

Baby Water turtles like sliders, paints and cooters, have little webbed feet, and surprisingly the nests are often a good distance to the fresh water where their parents live. 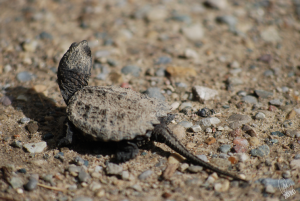 Baby Snappers are also often found away from water and are distinguishable by their prehistoric
looking shell and extremely long tail.

Ocean turtles have flippers, are found on the beach and should NEVER be taken home. They are endangered and protected and It is nearly impossible to raise them in captivity. If you find one, you can help it get to the ocean, if it is injured, contact the local authorities for more directions.

Here are the things that all baby turtles have in common: 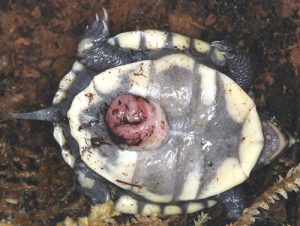 What To Do With Your New Find? 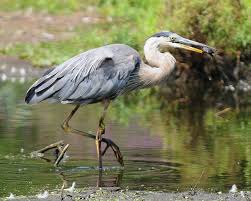 This is where it gets tricky.
Due to habitat loss and destruction, it is not uncommon for mother turtles to locate their nests in places that are less then ideal. One recently more common place is along road ways where the earth is well packed, and with a “stream” (ditch) along side. Not an ideal place for baby turtles of any kind, and with the lack of habitat in areas that are well established by humans, baby turtles show up in the most unlikely places.

Baby Turtles are great to visit with, take some photos and show your kids, but unless we can let these turtles remain in the wild, they will soon be extinct in areas that they called home for millions of years.

That being said, to release a baby turtle in suburbia and expect it to survive to adult hood is far-fetched indeed.

Baby Turtles need shelter. They need food and water.  If the seasons are appropriate your little turtle should be taken to an area that will supply him with what he needs to survive and grow and be released. If it is late fall through early spring, you should contact a local wildlife rehabber or a wildlife veterinarian that can give you names of qualified people that can help direct you.

Turtles as pets are a Hugh responsibility. Turtles can live 50-100 years and require a habitat that simulates as close as possible  the habitat that they would have in the wild, including natural sunshine, and a varied diet.

The two baby box turtles that were brought to me this winter with severe dehydration, perished shortly after their arrival. Both of them were initially kept by well meaning  people that wanted to share them with their children. I was contacted once the adults realized the turtles were fading.  If these two little ones had been released / relocated when found, it is possible they would be alive today. 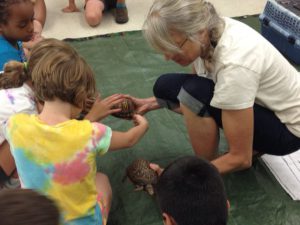 The best way to help turtles is to educate!

I offer educational programs for groups of any age and am currently  accepting dates for Summer 2017. My programs include hands on Adult box turtles, along with water turtles and babies.

I am happy to help our shelled friends in any way I can. If  you have questions, Please leave me a message.

Turtles all the way down!