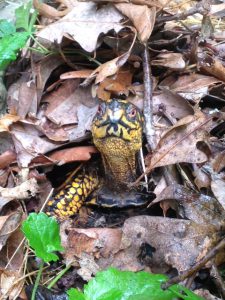 I found one of your residents yesterday. He was narrowly missed by oncoming traffic. You see, he is lost. His eyes are swollen shut, and he seems to have a cold.

I did my best to provide a good summer, lots of rain helped provide moisture for invertebrates and sunshine helped the native plants provide fruit and berries. I really try to provide all my residents the necessary habitat that will sustain them with the food, water and companionship for a long happy life.

I see you cut down his forest. I understand that my natural resources are important to you and of course they are renewable, thank you for letting me re-seed the land. But you took away important resources for many of my residents, and this one, well he was born right by that big oak where you left a stump, near the blackberry patch that you tore out because it was in your way, and he knew every inch of the 10 acres that he called home. He knew where every waterhole was, and he knew when and where to find the mulberries and blackberries, and he knew the best place to find worms and slugs. Now, his habitat is unrecognizable to him and he is lost.

This native resident is very special to me. He can only be found in the eastern part of the United States, and his descendants go back to more than 200 million years! This guys family has survived mass extinctions, and his body type has changed little over the years due to his successful survival rate.  You see, he is able to hibernate and he can survive for a long time without nourishment, his body essentially shuts down. All of his organs change pace so that they are providing the most minimal output possible while still maintaining life. His heart rate, normally 40 beats a minute, slows to 1 beat for 10 minutes. He is a survivor, but now he has met his match.

Homo Sapiens  now rule the east coast corridor of the United States, and as the population grows so goes the forest. You can see by the map below how little land is preserved by State and Federal programs in Virginia.  And the lands that are protected are mostly difficult to negotiate and best left to the wilds. I appreciate that; as there are incredible habitats in these areas for your native creatures. However, you are missing the boat!

I am dismayed over the plight of the Elephants in Africa, the Whales deep in the ocean, and every little frog in the rainforest, and I am grateful that there are Homo sapiens that are studying, monitoring, and protecting these creatures the best they can.   You must all know that I stopped making land a long time ago, and once it is destroyed, the habitats and the animals will not readily return, for they depend on the forest and the plants for their survival. Your little resident does not have the option to gallop away to another patch of woods. No… his journey would be a long arduous one, and if he did manage to cross the highway the likelihood of him being able to find food and water is slim.

Virginia,  It is not too late! You need to preserve the land, the trees and the streams that support these amazing animals. Private land ownership is not the answer. Your small people parks are not the answer. Virginia, if you don’t preserve some land soon, you will have wiped out much of the genetic diversity and history that these little residents carry in their DNA.

Before all the animals disappear from the center of your lovely state, where the people live, You need to create a natural area for the wildlife.  An area where your people and their grand children, can come and see the diverse flora and fauna that this state has to offer.  You see, our little disappearing Gem of the Forest is The Eastern Box Turtle.

Habitat lose and destruction is only part of this little survivors  struggle to endure.  The Eastern Box Turtle is one of the most beautiful turtles  in the world and highly sought after for pets.  Poachers  ship turtles for medicinal purposes and consumption all over the world, and your little box turtle is not immune from this illegal and unethical practice. There is so much that Homo Sapiens can learn from this little Turtle. Scientists have barely touched on the amazing abilities of survival that these guys posses.

Your little Resident will be okay. I have given the Box Turtles in your state an advocate, and I have sent him there. When spring arrives in your lovely state he will be released in the sanctuary with others of his kind, where he can live as a turtle for many more years and teach your children about the amazing world in which he lives and what they can do to help his nation survive.

Without ART there is no earth

2 thoughts on “LOST and FOUND”