Box turtles are in trouble. . .

Specifically, the Eastern Box Turtle that is found in Central Virginia.  75 years ago, local children playing  in Hanover County could spend a summer collecting and marveling at these gems of the forest. In the woods around their homes, they could collect more than 100 in one summer, and then let them go back to the woods to be turtles. The genetic diversity in colors and shell patterns was like gathering snowflakes under a microscope, No two were alike. 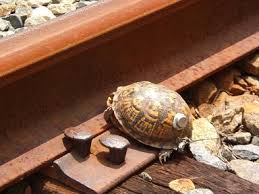 50 years ago, as communities sprang up among the woods, and more and more trees were logged to fuel the need for building materials, habitats disappeared.  An occasional lone turtle was found wandering around the new developments, looking for the habitat, the food sources, and the water holes he used to know. A curious child would pick him up and marvel at the way he closes himself up in a box, how the colors of his shell blend perfectly with the light and shadows under the old remaining oak tree, and at the way he carefully  peeked out of his shell as he slowly opens the hinged flap on the bottom, almost like a door, to see if the new intruder is friend or foe.  The Child leaves him to run to the house to get the others, and returns minutes later, to find the turtle has disappeared and is nowhere to be seen.

25 years ago, in neighborhoods where fields are farmed, trees are logged, dogs run loose and the automobile is a necessity, the Eastern Box turtle is a rare site. Fortunately, Central Virginia is a land of rivers and along rivers habitat survives. Private lands, kept by those who grew up finding turtles still offer hope of surviving habitat for small populations of turtles, but this too is quickly disappearing as generations change and land is sold off. The Eastern Box Turtle has all but been forgotten. 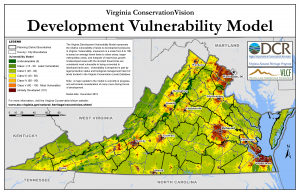 Red is already developed, yellow and orange highly vulnerable to develpoment due to ease of travel. http://www.dcr.virginia.gov/natural-heritage/vaconvisvulnerable

Indiscriminate  building, logging, farming and clearing has damaged our planet to the point of global distress. Land is a resource that we cannot replace and our continued abuse of it will affect the lives of generations to come.  What will it take for us to see that with every project that we undertake we destroy more natural habitat which puts us deeper and deeper into the destruction phase of our planet?

Virginia is certainly not immune to the destruction of habitat.  From the rolling hills of the Blue Ridge Mountains to the shores of the Atlantic, the center of our incredible diverse state is one of the most exploited and developed areas in this country. According to the Virginia Department of Conservation and Recreation, the counties that run north and south along the 95 corridor are highly vulnerable to development. Yet, this area of Virginia is one of the most unique areas in this country, the  Atlantic Seaboard Fall Line.

Runs parallel with Interstate 95 through Virginia. This Fall Line is a zone rather than a narrow line and the rapids and waterfalls 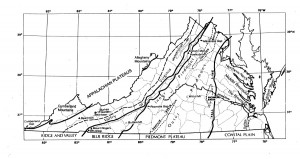 The Fall line runs through the center of Hanover, Henrico and Richmond. http://www.dcr.virginia.gov/natural-heritage/natural-communities/ncoverview

created by the change from hard bedrock to the soft sediments of the Coastal Plains provides a large diverse environment for many inhabitants. These irreplaceable lands, and the rivers that run through them, provide benefits in terms of open space, recreation, cultural and historic relevance along with natural resource protection, water quality control, and economic benefits associated with these functions.

In the last 15 years, more development has taken place in Virginia then in the previous 400 years. As the pressure of a growing population increases, land conservation must become a prominent consideration in all future  planning at the local, regional and commonwealth levels if we are to preserve land for future generations. 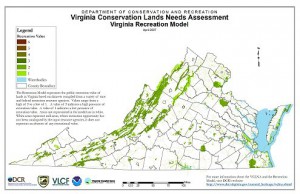 I ask you,  As our now antiquated infrastructure corrodes into disrepair, is it in our best interest to even consider the necessity of building new rail lines that bypass the real issue of our decaying  network?   Who will benefit from a High Speed Rail  anyway?

Any Project that is worth building, is worth considerable thought and planning, not just for us,  but for all future generations to come. There is so much more to be gained by preserving what land we can  for all the inhabitants in the center of this beautiful state. Please, before we go forward with  destruction in the name of progress, consider the legacy we could leave by initiating a program where we rebuild our great country by updating our infrastructure with new and modern technology, that is ecologically  and environmentally friendly, and  preserve land and waterways for generations of all inhabitants,  especially those that have been here for more than 250 million years, the turtle. It is time for the healing to begin.

After raising a family and a long hiatus from painting, I was in need of a artistic outlet. I found myself in front of my easel painting portraits of Box turtles. I had been studying them and their demise here in central Virginia and learned that they needed an advocate. The eastern box turtle is among the most colorful turtles in the world and one of Virginia's oldest residents. Although once common and easily found, the box turtle has suffered population reductions caused by numerous factors. Habitat destruction and roadways have contributed to the loss of many breeding populations. With the new perspective that I offer through my paintings of Box Turtles, I hope to impart the viewer with an appreciation for and better understanding of these amazing reptiles. Realistically enhanced earth tones and colors are my favorite, and help me express a turtle's viewpoint creatively.I have since expanded my subject matter and enjoy painting pets and other animals that have a story to tell.Shelley Whittington
View all posts by Shelley →
Tagged  box turtles, conservation, eastern box turtle, environment, fall line, High speed train, turtles.
Bookmark the permalink.