Virginia is known for its crazy unpredictable weather

Especially in the spring and fall.. seasons tend to blend together. This fall, winter, spring season certainly has been no exception. It amazes me that any of our native turtles survive these crazy changing temperatures, but hey, they have been around for more than 250 million years, so I guess our weather patterns are mild compared to some that they have endured over the centuries. Interestingly enough, the weather here in Central Virginia, is not the turtles biggest concern. 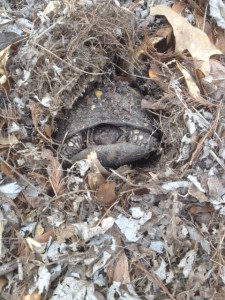 Survival of the fittest

Turtles do what they have to do just to survive. A couple of extremely warm days and The Eastern Box turtles begin to poke up out of the dirt. There is no mass exodus from the ground, rather it is about the sun and the heat. Slowly they work their way to the surface after being buried in up to a foot of soil, eyes still shut, seeking out the warmth of the sun and hoping for a warm spring rain to rinse of the caked on mud and to re-hydrate. The middle of March is extremely early for this awakening, and turtle watchers, although excited about the reappearance of their shelled friends, worry about the inconsistent changing of the weather and the turtles ability to dig back into the earth when the weather turns cold again. 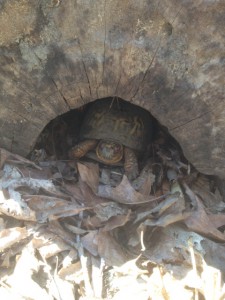 The Eastern Box turtle has many threats to its survival in this day and age, one would hope that they have a good grasp on dealing with the weather in a place where they have live for generations, but if an individual turtle goes into hibernation without being in optimum health, being caught in a cold snap can mean the ultimate demise for that turtle.

So many box turtles are relocated by good doers who find them crossing the road in places where there is no longer habitat enough for them to survive. Choices are slim, and often dictate that the best option for these turtles is to relocate them to a nearby park. Box Turtles have an uncanny instinct to return to their native hatching place as they know that territory… if this has been destroyed then survival is dependent solely on luck to find food and water. A Box Turtle can go a long time without food and many of these transient turtles can survive their first lost summer, but when winter approaches if they have not stored up the necessary reserves for hibernation, it may be their last. 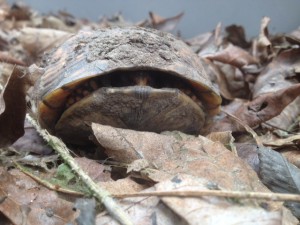 Soon, Turtles will begin marching about, looking for other turtles, food and water. Remember to look out for these amazing reptiles crossing the roads, especially after a warm spring rain, in the early morning hours, and help them across if you can. With all the threats that turtles now have to their very existence, it is so very important that we leave them in the wild whenever possible. Viable populations of turtles are becoming more and more rare in their native habitat so it is up to us to try to save, create and preserve habitat where ever we can.

Have Questions on a found Box Turtle? Leave me a comment and I will get back to you ASAP.. Thanks for helping these amazing gems of the forest!

6 thoughts on “Box Turtles are coming out of Hibernation”