Eastern Box Turtles are waiting for the sun.

Some times I wonder if I am the only one that sees them. They march silently from the woods along the road.. recently awakened from a long winter sleep by the warm spring rains… slow in coming this year, but the sun is calling, daylight has increased making the sun warm enough to raise body temperatures enough for the digging to start. Hatchlings, often after staying in their nest all winter are beginning to see sunshine for the first time in their life. The Eastern Box turtle begins a new year in its unique and ancient way of life.

Last spring, as I traveled along a busy road in Western Hanover County, Virginia, I straddled a newly hatched turtle scurrying as fast as he could across the road. By the time I got turned around and back to where the turtle was, the wet spot on the roadway was indistinguishable.There was a lot of traffic that day.. Did anyone else even see the little guy? Did the person who flattened him even know what they had done? Did they care? 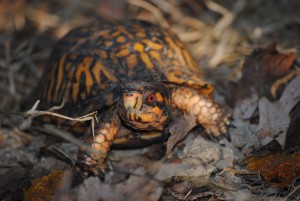 Often I will see them on the back roads, drive 100 yards, while my inner dialogue tells me it wasn’t a turtle at all.. not being one to get it out of my head, ..I eventually turn back to see the leaf, pine cone or scrap of wood that I was sure was a turtle.. They will be out soon .. the temperature of the days and the rising humidity will bring them out, so be prepared.

I see less and less of them every year. as the community gets developed around me, and the traffic continues to rise, the ones that I had helped crossed the road every year have been lucky to survive. Very few of these survivors are seen now, hopefully they have found more interesting things elsewhere in their habitat of 2-10 football field size areas that are etched in our resident turtles brain. They know every water hole, every berry patch,where the best place to find worms is and where the best place to hibernate is. Like a bird flying south, the uncanny homing instincts in box turtles often puts them in great peril when they are taken away from their territory or their territory is destroyed, and they try to find it. The Eastern Box turtle needs our help now. Land in central Virginia is at a premium, and due to the extensive sprawl and ease of travel, most of the land from DC to Raleigh, NC  is easily accessible  and prime for development. This rare and unique land, which follows the fall line of the Eastern United States, offers a lot to its residents, both four legged and two, and 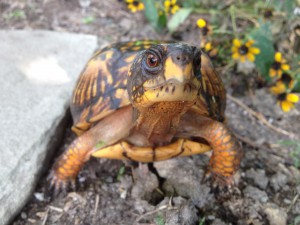 What will you do to help?

should be carefully evaluated and preserved for future generations. Humans it seems, have forgotten that these ancient reptiles are dinosaurs and their ancestors lived here 250 million years ago, and  If there is one thing that turtles know how to do, it is being a turtle and surviving. But, if we continue to destroy habitat at the alarming rate that we currently  do, these small relatives of the dinosaurs, will disappear totally from our planet.

The extinction of the Dinosaurs

Reptiles and Amphibians are amazing indicators of our planets health, and they are currently suffering from diseases that are thought to be caused by pollutants in their environments. Recent findings are showing that viable populations are being wiped out in the wild from viruses that are not fully understood or treatable.

Recently, I read a post from a friend that listed all the stress factors in her life. The list began with her work, followed by family, pets, and lastly her turtles, whom she commented, actually were responsible for reducing her stress, and the time she spent with them was the happiest and most peaceful of her day. I know we can’t all be turtle caretakers, but I do believe that we all should take time to appreciate the world around us, get out into the woods, notice the harmony of the trees, the rivers, the wind and the earth, and do what we can to protect and preserve this amazing planet for our grandchildren before it is too late, and PLEASE, try to notice the turtles walking along the road, trying to cross, and maybe stop and give them a hand… for these little dinosaurs have seen and survived a lot, I am sure if we take the time, there is so much to be learned from them.