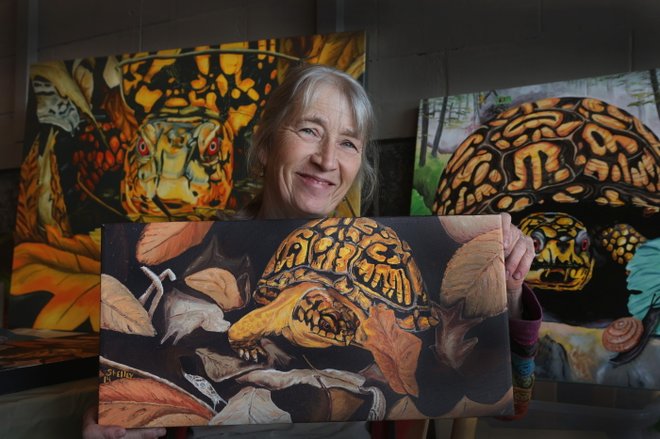 It happened for the hundredth time on Farrington Road.

Shelley Whittington saw a box turtle doggedly trudging across the asphalt, and she pulled over to help it. As a red Mustang sped toward her, she waved her arms. The car slowed — after smashing the little creature to pieces.

“The turtle!” she cried.

The Mustang driver looked at her. “What turtle?” he said.

Whittington wept all the way home.

That’s the tragedy, she says. We don’t see what we destroy.

Whittington has watched Hanover County grow and grow over the last 35 years: roads widened, trees felled, houses rising. And she has watched the turtles vanish.

“It pains me. When I see trees being destroyed, I feel the pain — it’s the most bizarre thing, but I feel it,” she says. When land is cleared, people don’t think about what happens to the humble animals on the forest floor: “The deer hop away, the bunnies hop away, and the turtles [say] ‘I’m gonna wait!’ ”

The Eastern box turtle, an ancient terrestrial species, has a near-unbreakable connection to its home range, even after a subdivision swallows the woods. Once removed, a turtle may spend the rest of its life searching for that place again — but if left there, it may starve in the sterile environment of fenced lawns, or be unable to find a mate.

One Thanksgiving weekend several years ago, Whittington found a turtle at the entrance of a newly built neighborhood in Hanover. It should have been hibernating, but was underweight and ailing. She brought it home to her farm, where it still lives today.

That was the beginning of her mission. She decided she would become a voice, and eventually a sanctuary, for the turtles of Central Virginia.

With live turtles, puppets, shells, bones and sometimes paint, she began teaching schoolchildren and adults. She tells them how box turtles can live up to a century. How their shells grow smoother and brighter over time, as years of burrowing polish the ridged scutes (bony plates). How the shell is a living and permanent part of a turtle’s body — not something cast aside like a hermit crab’s shell, as one misguided forester once told her.

Education is crucial, she says, because “the only stronghold turtles have is private property.” If people understand turtles’ needs, and the urgency of protecting them, they can create habitats in wooded back yards and farms.

“If you look at a map, from Richmond on up to D.C., there are no preserved areas,” Whittington says. Counties like Henrico and Hanover must act to preserve large tracts of woodland, she says, before growth makes it impossible. 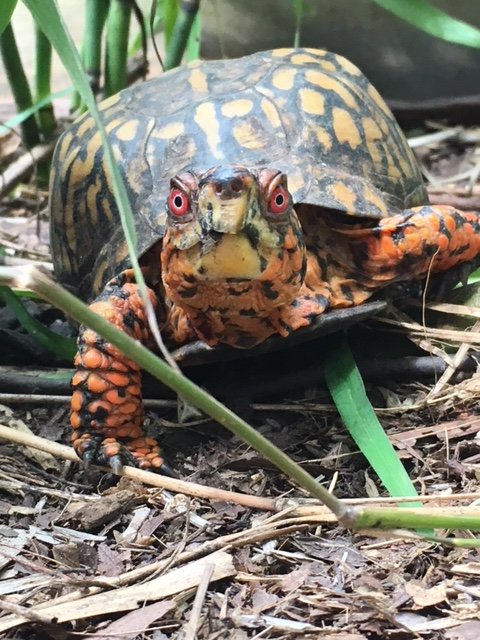 Laws protecting turtles in the wild are scant. It’s illegal to sell any native turtle species in Virginia, but they may be given away and kept as pets (up to five per species), or hunted. A team of researchers at Virginia Commonwealth University reported recently that the state’s snapping turtles are being overharvested, as males are butchered for meat and females shipped to breeding operations in China.

Virginia does have strict rules governing the fate of wild turtles who spend time in captivity. Wildlife rehabilitators must release turtles exactly where they were found, even if their habitat has been destroyed, and they can’t release an animal if it has been kept for more than 30 days. They also aren’t supposed to release wild animals that may not be able to thrive on their own. So if a box turtle has lost a limb, or its shell has been so damaged that it can’t fully close, it may be euthanized.

That’s not right, Whittington says. If humans are responsible for injuring these turtles, she says, we should also ensure they have someplace to live. And turtles have astonishing regenerative abilities — when given time and care, they can heal from amputations or fractured shells and survive.

That’s why Whittington is working to create a sanctuary on her farm to care for turtles that cannot survive in the wild, as well as take in pet turtles and tortoises from abusive or inadequate homes.

On her 20-acre farm, she’s constructing two half-acre pens — one for male box turtles, one for females — that are fenced and secured with metal flashing that’s planted deep in the earth. Before being accredited as a sanctuary, she must complete the fencing, as well as a system to identify and keep records on individual turtles. Every box turtle shell has 13 scutes with unique, contrasting patterns. Whittington hopes to develop a shell-identification app that can track turtles by these patterns, both at the sanctuary and in the wild. 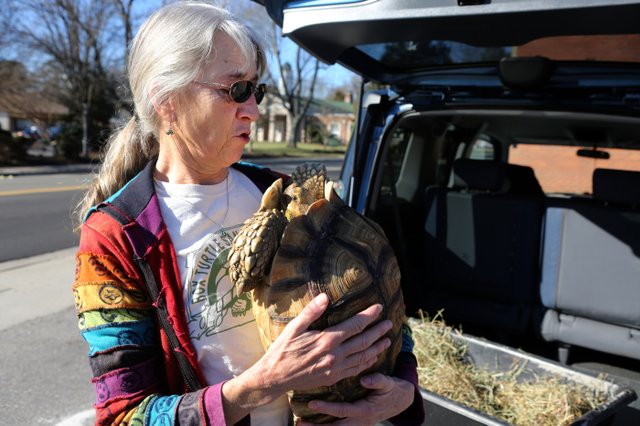 Whittington with Sully, a sulcata tortoise (Photo by Jay Paul)

Whittington already has a few native turtles she uses for her educational programs, as well as some pets that have come from negligent or inadequate homes. One of these is Sully, an enormous sulcata tortoise with studded front legs and inquisitive black eyes. He had been kept in a dry, bare greenhouse after outgrowing his quarters.

Whittington’s ultimate goal, she says, is to be “the Maymont of turtles”: a place where kids can see turtles in a natural habitat and meet them face to face. It’ll take time and money; right now, the nonprofit is largely funded by the fees Whittington receives for her educational programs. But she’s determined to try.

In 250 million years, she says, “they’ve survived everything. Now, will they survive us? That’s the question.”

Want to help? The Box Turtle Sanctuary of Central Virginia is looking for volunteers to assist with the fencing, as well as donations of flashing and other materials, and the development of the shell identification app. Learn more.