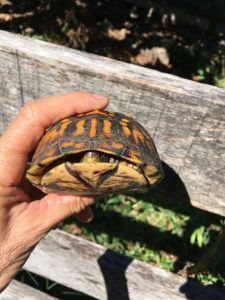 This Shell, that has provided the Box Turtle protection for millions of years, is no match for vehicles .

The unique defense mechanism of the Eastern Box Turtle has allowed for this small unambiguous reptile to survive on this planet for millions of years. It is the only animal that responds to danger by quickly and quietly closing up its shell, to form a tight box. Here in his home, this ancient reptile is well suited to wait until the danger has passed.

Our powered and developed landscape is no place for such a small dinosaur as he now finds himself closing his shell in the middle of busy streets,  on mowed lawns, in crop fields, logging roads, shopping centers and golf courses. There is so little land in Central Virginia that is not logged, farmed or developed, that generations of genetic diversity have been silently wiped out.  To make matters even more interesting, the Box turtles ability to survive extensive damage and to heal itself is close to miraculous.

Wildlife rehabilitators work with Veterinarians to  provides medical care to injured, sick, or orphaned wildlife. Their goal  is to  treat the animal by providing suitable diet and nutrition, and  safe and sanitary shelter, while it recovers, with the goal to return it to its native habitat:

” The goal is not to make pets out of wildlife, to display them around humans, or to release any wildlife with handicaps in which they may not be able to protect themselves, not healthy enough to thrive unable to fit in with other wildlife, or become vulnerable to predators.

Wild animals that sustain injuries or illnesses preventing them from living successfully in the wild usually are euthanized (have their suffering ended in a humane fashion). Occasionally, individual animals that have recovered from their injuries but are not able to survive in the wild are placed in educational facilities.”  (from National Wildlife Rehabilators website) 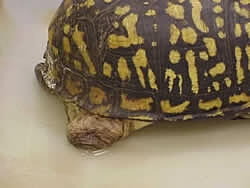 When Box turtles are found injured, and taken to a licensed wildlife veterinarian, and then supported by a rehabber, they are required to be returned  to the exact place where they were found. Normally this is a good practice, as box turtles learn their habitat as they grow and will try to return to it if they are removed from it. Unfortunately often times this habitat is already compromised, which likely contributed to the injury.

Being a wildlife rehabber is a full time, unpaid, volunteer position, and most  are not in a situation to be able to keep any of the animals that they tend to. Having to euthanize any animal is difficult, and it is often a thin line that must be drawn.  You will find rehabbers releasing turtles that have handicaps (3 legs) or broken and missing pieces of their, shells making them vulnerable to predators. According to Virginia State Laws the only other option is euthanasia.

As the Box Turtle is not a game species in Virginia,  it is silently disappearing through-out the state.  Small and  insignificant, there are few studies done within the commonwealth. Land held by the state is often used for other purposes, including logging, which leaves only private property as a last retreat for these ancient reptiles.

How Many Become Road Kill?

When finding a damaged turtle, it is important to put it in a dark, quiet place until help can be arranged.

Although it would be difficult to count the total number of turtles that become road kill every year in the United States, James Gibbs, a conservation biologist at the State University of New York in Syracuse decided to make an educated estimate. He took into consideration three factors: traffic density, the speed with which turtles cross the road and the number of roads in the US.

Gibbs estimate shows that turtle populations in the Northeast, Southeast and the Great lakes region suffer from a 10 to 20 percent mortality rate due to traffic encounters, high enough to deplete turtle populations. The Animal Protection Institute in Sacramento, California, places road kill mortality between one half and one million animals daily.

In Central Virginia alone 99% of injured turtles that make it to a wildlife veterinarian are suffering from a collision with a motorized vehicle. The remaining 1% is damage done by domestic canines.

Turtles and encounters with motorized vehicles, is not a turtle problem, but a human consequence.

Here at the Box Turtle Sanctuary, our current focus is on education. We are not a rehabb facility, as the time commitment, both to become licensed and of the maintenance of in house rehabbs would not allow me to pursue the goal of the sanctuary which is to provide permanent  safe shelter through natural, native habitat for misplaced eastern box turtles, due to habitat loss or that have been pets and are unable to be released into the wild. This includes animals that were damaged due to human encroachment, treated at wildlife vets, rehabbed and unable to be returned to the wild due to handicaps.

This being said, I am more then happy to educate turtle owners on how to achieve better environments and habitats for their pet turtles and I will continue to advocate for any turtle in need to make sure it gets the help that is necessary for its health.

Humans are responsible for this extreme loss of habitat, and as stewards of this earth and this land, it is our responsibility to provide habitat for all creatures that were residents before us.

So where do we go from here?

I am amazed at how Central Virginia continues to promote urban sprawl. Our residents and their children are becoming more and more removed from our natural world. We are at a critical time in our evolution, where humans are poised to create the next great extinction event.

Education is only the tip of the spear. Providing a safe sanctuary for these misplaced turtles, also provides an educational opportunity for study, exploration and a connection to the earth that we once shared .

Turtles are ancient, they are survivors, and they are part of our Earth.